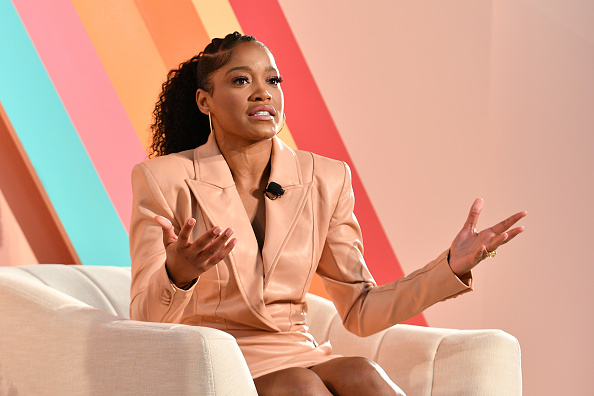 UPDATE: the National Guard & LAPD has pulled of the block as curfew goes into effect.. @KekePalmer https://t.co/ECPy9ItKXe

Following the death of George Floyd, who died after a white police officer was filmed kneeling on his neck, protests against police brutality have erupted across the nation.  Keke Palmer marched in solidarity in Hollywood on Tuesday, where she was filmed imploring members of the National Guard to join the Black Lives Matter movement.

In a video shared by NBC News’ Gadi Schwartz, who filmed the emotional exchange on Tuesday, Palmer is seen passionately pleading with several armed members to protect and serve the protestors out demanding justice.

“You have to pay attention to what’s going on,” the 26-year-old reasoned. “You have people in here who need your help and when you all stand together with the community, with society, to stop the governmental oppression, period, we need you.”

“March with us.  March beside us,” Palmer begged.  “Let the revolution be televised, march beside us and show us that you’re here for us. Make history with us, please.”

The Strahan, Sara and Keke host’s fiery speech elicited cheers from the surrounding crowd, who began excitedly chanting “March with us!”

While the Guardsman insisted they couldn’t abandon their post, they offered to walk alongside the crowd through their assigned patrol area.

When the Hustlers actress insisted that it would send a stronger message if the platoon marched the full route with the protestors, the Guardsman clarified that their duty was to protect the surrounding businesses from opportunistic looters.

At that point, Keke paused in near defeat, claiming that she felt “at a loss.”  However, she became reinvigorated after the troops obliged another protestor’s request to “take a kneel.”

The moment turns symbolic as every National Guard member and protestor sink to the ground one-by-one in unison.  The video ends with the crowd erupting in hopeful cheers.